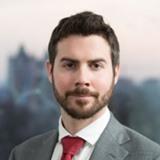 Director, LNG Shipping and Offshore Societe Generale
Pierre has ten years experience in the offshore finance industry. He has structured and executed debt financings of different asset types including FPSOs, LNG ships, drilling and other specialized offshore vessels for various contractors across the globe.
Pierre joined Societe Generale’s LNG Shipping & Offshore Finance team in 2014. The team, based predominantly in London, has a global remit. Formerly, he spent eight years in Singapore where he worked in two of the offshore industry’s leading banks (ING and Natixis). During this time he acquired an in-depth knowledge of the global and regional offshore markets, especially in FPSOs.
Pierre has closed 15 FPSO financings to date, including in the capacity of structuring and bookrunning bank. He has also been involved in several other offshore asset financings (drilling and accommodation vessels).
Pierre has a Masters in Management from Audencia Nantes (School of Management / Grande Ecole), obtained in 2006.

Check out the incredible speaker line-up to see who will be joining Pierre.